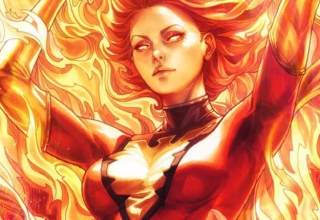 The Phoenix is gone, the waters have calmed, and Jean Grey has returned! PHOENIX RESURRECTION and JEAN GREY are over but that doesn’t mean the famous redhead is donning her green and gold uniform again. The new series X-MEN RED plans on picking up where JEAN GREY left off. But there are still questions surrounding the highly anticipated return (and departure) of the Phoenix. Writers Matthew Rosenberg (PHOENIX RESURRECTION) and Dennis Hopeless (JEAN GREY) left a lot at our feet. But what does it all mean?

Anyone who’s picked up a Marvel comic in the last sixty years has probably heard of the all-powerful Phoenix. Fire and life incarnate and all of that stuff. The cosmic being has been pretty important in a lot of Marvel arcs over the years, particularly X-Men titles. Jean Grey is the Phoenix’s favorite host, joining with her numerous times since their first meeting in X-MEN #101. Although the Phoenix has used others as hosts, including Cyclops and Emma Frost, Jean’s name is definitely most synonymous with the fiery entity.

After being granted numerous powers and being brought back to life, she became the Phoenix. As seen in the mini-series PHOENIX ENDSONG and NEW X-MEN, Jean and the Phoenix were more or less a single being, with the Phoenix portion only becoming dominant at certain times. They were different but also the same.

PHOENIX RESURRECTION and JEAN GREY give the Phoenix a character beyond its connection to Jean. Normally, Jean’s body houses the Phoenix and she colors its actions. But, in both of the mentioned series, the Phoenix becomes a character that is completely separate from Jean.

This is an exciting development because it’s a move away from the now non-existent Phoenix and Jean relationship (see PHOENIX RESURRECTION #5 for their tearful goodbye). Yet, at the end of JEAN GREY #11, the time-displaced Jean (aka Mini Jean) is still struggling with the Phoenix. I don’t think the Phoenix force is done with either Jean but I do think Hopeless and Rosenberg want to move their characters in another direction. This is probably for the best since Jean’s characterization has relied so heavily on the Phoenix in the past. It’ll be nice for readers to finally see what Jean is like without the Phoenix.

While it was nice to see the Phoenix without Jean, I thought some of the Phoenix’s characterization was overdramatic. In the past, going all the way back to the UNCANNY X-MEN’s “Dark Phoenix Saga,” the Phoenix has been viewed as a villain. Yet it’s not just a villain. More than anything, the Phoenix is a cosmic entity that is neither “good” nor “evil.” It’s beyond human standards of morality, which sometimes makes its actions seem immoral (check out UNCANNY X-MEN #135 when Dark Phoenix casually devours a planet).

But, it’s not all bad. In NEW X-MEN #154, the Phoenix helps Jean change the future of Earth for the better. It brings destruction but it also brings life. In JEAN GREY, the Phoenix is always huge, fiery, and scary. Like I said, the portrayal of the Phoenix as the antagonist is over the top. The Phoenix be’came the villain instead of a life-giving force that (maybe) isn’t always so bad.

In PHOENIX RESURRECTION, the Phoenix’s portrayal is much more realistic. Although the Phoenix did lie to OG Jean by giving her a fake life, it was only because it wanted to give her time to heal so that she could become a host again. When the Phoenix tries to get OG Jean to stay as a host, it doesn’t chase her through a forest and burn her to pieces like it does to Mini Jean in JEAN GREY. Instead, it shows her the life they could have if they were joined again. While the cosmic entity is still scary, it shows another side of itself — a side that needed to appear in JEAN GREY.

This discrepancy could be because the Phoenix actively wanted OG Jean but didn’t really care about the inexperienced Mini Jean. Regardless, a few hints of a different side of the Phoenix in JEAN GREY would have helped remind readers that the cosmic entity isn’t always devouring planets. Just sometimes.

I think the Phoenix might have been portrayed like this because Marvel wants to use the Phoenix as a villain in other series, like the Avengers. Moving a complex character to a whole new cast is harder than moving a simple one.

Since her introduction in ALL-NEW X-MEN, Mini Jean has been the only Jean in the current Marvel universe. But now the original Jean is back, which begs the question: why is Mini Jean still here? She filled the Jean Grey void for a while but now her presence just makes things a lot more confusing. Jean Grey is already a really complex character on her own. Two Jean Greys in one timeline is just a little too much.

A conversation between the Jeans needs to happen, but after it does, the time-displaced X-Men should return home. Their purpose as moral compasses for the “immoral” Cyclops is now defunct. It was interesting to see the 1960s X-Men in the modern world, but current comics need to shift their focus back to the modern X-Men. That shift would give some characters who haven’t had as much panel time (the original Iceman, Angel, and Beast) more opportunities for characterization.

The JEAN GREY series did a great job of covering Jean’s struggles as she prepared to confront the Phoenix. But, looking back, what did the series accomplish? It did bring back Jean’s connection with the Phoenix but it was mostly a lead up to PHOENIX RESURRECTION. Mini Jean’s characterization is there, thanks to Hopeless’ wonderful dialogue, but in the end, it’s OG Jean who gets the spotlight.

Mini Jean does survive the White Hot Room, but I think the only reason she was able to do that was because the Phoenix was also trying to keep its connection to OG Jean Grey in PHOENIX RESURRECTION #5. With the Phoenix in two places at once, it makes sense that both of them survived their confrontations. What happened in JEAN GREY needed to happen for OG Jean to leave the Phoenix successfully.

It does feel like JEAN GREY became an accessory to PHOENIX RESURRECTION but maybe that isn’t a bad thing. Mini Jean has had a lot of panel time in the past couple of years. Maybe it’s time for OG Jean to take over again.

Even with a lot of questions answered, there are still more than need explaining. What happened to the Jean Grey ghost that was following Mini Jean around in JEAN GREY? Will either Jean encounter the Phoenix again in the near future? With OG Jean Grey back in the current timeline, will Mini Jean return to the 1960s?

OG Jean’s new series X-MEN RED, coming out February 7th, will hopefully start to answer some of these questions. But, as always with comics, I’m sure a few will be left to the reader’s imagination.