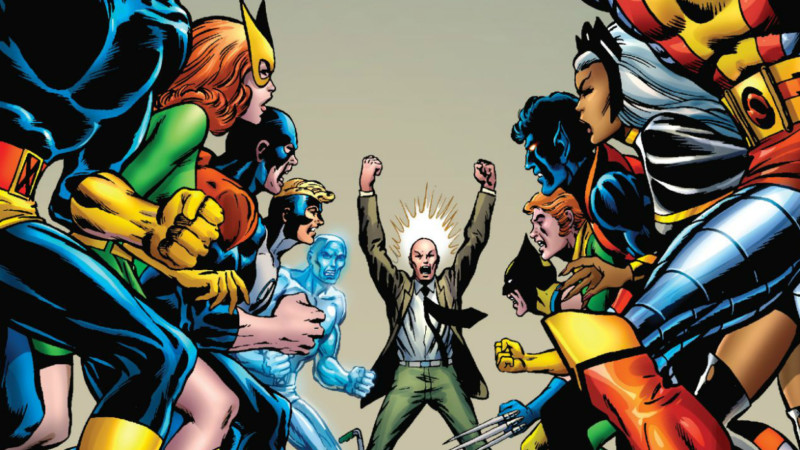 X-MEN EPIC COLLECTION: SECOND GENESIS contains some of the most important and well-regarded issues in comic book history. Its issues include GIANT-SIZE X-MEN #1 as well as the first 16 issues of Chris Claremont’s legendary run on UNCANNY X-MEN. Writers Chris Claremont, Len Wein, and Bill Mantlo craft a near-perfect example of a classic superhero story. Each issue leaves the reader itching for more. Some downsides exist, though, because examples of stereotyping and hurtful language litter the book. Despite these issues, this book is a near-perfect jumping on point for any budding X-Men fan. If you’re curious about reading classic X-Men books, read on and find out why this book would be a fabulous introduction to Marvel’s mutant heroes.

The first book in X-MEN EPIC COLLECTION: SECOND GENESIS, GIANT-SIZE X-MEN #1, is a key jumping-on point for new readers of the X-MEN books, thanks to the superb writing and plotting. The issue begins with Professor Charles Xavier traveling around the world to recruit mutants for his new X-Men team.

READ: Are you an X-MEN cartoon fan? Here are our ten favorite episodes of the ’90s series!

This issue thoroughly introduces the new characters and their powers. An example of this is Nightcrawler’s introduction. It finds him running from an angry mob. He decides to stop retreating to turn and fight because he’s so exhausted from running. It highlights a few aspects of Kurt Wagner’s powers and personality. These include his ability to cling to walls, his incredible acrobatic skills, and his swashbuckling, never-back-down personality. The other X-Men’s introductions follow the same formula.

Wein crafts a mystery that draws in new readers with the mysterious disappearance of the X-Men on the island called Krakoa. This serves as an exceptional way to include the old X-Men while also allowing the new team to work together. The spotlight shines on the new team rather than the old, which is what counts.

Fight scenes ensue that further highlight the team’s powers. The book ends with a satisfying conclusion to the story with the promise of more adventures ahead for the team.

If you only have a cursory knowledge of the X-Men, don’t worry! This issue tells you everything you need to know about the “new” team as well as many members of the original 1960s X-Men group. In addition to that, the book starts introducing the team members’ feelings for each other, something that writer Chris Claremont goes into throughout the rest of X-MEN EPIC COLLECTION: SECOND GENESIS. GIANT-SIZE X-MEN #1 may be a solid jumping on point, but read on! The book only gets better from here. You may get hooked on the X-Men for life after the succeeding issues.

After GIANT-SIZE X-MEN #1, Chris Claremont takes over as the main writer of X-MEN. His streak lasts for 185 consecutive issues. Fans see Claremont as the definitive X-MEN writer, and for good reason. As all of the issues in X-MEN EPIC COLLECTION: SECOND GENESIS show, Claremont has an expert grasp on how to write an exciting superhero book that keeps you wanting more after each issue ends.

X-MEN EPIC COLLECTION: SECOND GENESIS begins at the ground floor of his epic run. Don’t be daunted by the 185 issues. This book only includes X-MEN #94-110, and these story arcs are mainly self-contained, with only a few threads left hanging by the end of the book. You won’t feel unsatisfied by the conclusion, but you still may be itching for more X-Men due to the expert-level writing Claremont shows.

His first few issues, X-MEN #94-95, are a two-issue, mainly self-contained arc that sees the X-Men face off against Count Nefaria. The plot ends with one of the most iconic scenes in X-Men history. As Nefaria tries to get away, Thunderbird leaps onto his plane. After taking out much of its machinery, Thunderbird dies in a gigantic blaze. The X-Men lose their first teammate. Claremont knows how to up the stakes in a book. Now fans realize no X-Man is safe. This was an actual member of the team who died. The reader stays on the edge of their seat. They don’t know what may happen at the end of each issue. Who could die next?

READ: Do you love Claremont’s “Dark Phoenix Saga?” Find out more about it with this analysis!

In X-MEN #96, Claremont begins a story arc that runs for five issues. He introduces the malevolent Dr. Steven Lang, head of the mysterious Project Armageddon. For these five issues, Lang spies on the X-Men and sends mutant-hunting Sentinels to capture or kill them. Claremont’s usage of the continuing, serialized story arc inspired Marvel and DC writers for years, including modern writers. His focus on plot development is what made this series so great.

As this continues, Claremont also sets up his next plot in the middle of this arc. X-MEN #97 introduces a strange nightmare that debilitates Professor X from time to time for the next nine issues. This eventually introduces the Shi’ar and starts the first Phoenix Saga. The idea of teasing future plot points is ingenious. It gives the reader something to look forward to once the first arc ends. It ensures that the reader feels compelled to pick up the next issue. And, finally, it shows investment in the overall story.

Thanks to this serialized storytelling, the comic doesn’t feel like a “villain of the week” type of book. If you dislike it where a hero just fights one bad guy every issue with no overarching plot, then fret not! X-MEN EPIC COLLECTION: SECOND GENESIS is more akin to binge watching a season of a TV show on Netflix. The issues included in the book make up what could be seen as Chris Claremont’s first “season” on the book. Unlike some TV shows, however, the following seasons are just as good as the first. But that’s for another day and another review.

A Product of the Times

The only negative of this book lies in some unfortunate racial stereotyping and language used throughout the series. For instance, Thunderbird’s introduction finds him running with Buffalo and wrestling them to prove he’s a worthy Apache. Xavier goads him into joining the X-Men after calling Thunderbird a coward. Thunderbird constantly acts abrasive towards other X-Men. His powers make him an expert “tracker,” something indigenous people are constantly portrayed as in American media. Thunderbird’s death is even somewhat ignoble. He impulsively jumps on Count Nefaria’s jet as an effort to prove he’s a “warrior of the Apache.” Banshee tells Thunderbird this impulsive action was pointless, as Banshee can stop Nefaria with his sonic scream. As a result, there was no reason for Thunderbird to sacrifice himself. Therefore, it only serves to perpetuate the stereotype of indigenous people being defined solely by their race and heritage. Thunderbird isn’t represented as a three-dimensional character.

In addition to this, multiple usages of hateful language have little-to-no outcry in the book. Various characters call Wolverine a “midget,” including many of Wolverine’s teammates. Also, Wolverine himself calls Jean Grey a “frail,” a derogatory term for women, multiple times. This has since become a common phrase used by his arch-enemy, Sabretooth, to highlight his untowardness and hateful attitude. In this instance, though, it’s used to make Wolverine look like a badass loner who normally wouldn’t be smitten by some lowly “frail.” This seems to be a product of a time when using such language was much more rampant. There’s no hint that Claremont was opposed to these words and was simply representing the characters. It took me out of the book a bit whenever I saw these examples of hateful language and characterization.

My favorite aspect of the art in X-MEN EPIC COLLECTION: SECOND GENESIS’ is Dave Cockrum’s costume designs. Some of these designs stood the test of time, showing up for years in the comics, as well as in other forms of media. Wolverine’s iconic yellow, blue, and black tiger-stripe outfit, a variation on the one created by John Romita for his first appearance in THE INCREDIBLE HULK #180, became a staple in pop-culture. His most recent costumes also draw inspiration from this design.

Nightcrawler’s unique circus-inspired costume may be my favorite costume design in comic books. It is sleek and rather minimalist, which is what I like in superhero attire. I don’t like when they’re too busy. There’s a reason why Nightcrawler’s costume has barely changed in the past 40 years. It fits his character perfectly. It’s slightly flamboyant in its color and design, while still looking strikingly different than other costumes. Splashes of darkness mix with the white and light-red elements of the design. This mirrors how his frightening visage hides his playful, swashbuckling attitude. Its design is even mirrored in cartoons as well as the film version’s costume at the end of X-MEN: APOCALYPSE.

X-MEN EPIC COLLECTION: SECOND GENESIS is a classic through and through. If you love the X-Men but never read Chris Claremont’s run, then start with this book.  The writers expertly craft a story that kept me engaged throughout my time reading. The best part of the writing? No prior knowledge of the X-Men is required to read it! Dave Cockrum’s character designs make each page pop, creating a pleasing sight with every page. His art elevates the book from an amazing story to an essential read for anyone interested in the X-Men. The story is, overall, worthy of its title as part of one of the greatest runs in comic book history. All in all, I would recommend this to any and all superhero fans.